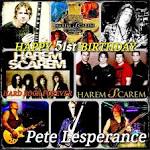 Harem Scarem was formed in 1987 by guitarist Pete Lesperance and former Blind Vengeance singer Harry Hess. They were signed to Warner Music years later and recorded their first album with them. In 1991, Harem Scarem released their self titled debut album, which charted at #68 on the Canadian album chart. The band managed to score a major hit while they were at it; "Slowly Slipping Away", which charted at #25 on the Canadian single chart. They also managed to score two minor hits; "Honestly" and "Love Reaction" In 1992, the little known band, Harem Scarem was able to gain some notoriety when 8 songs from their debut album Harem Scarem was predominantly featured in the Canadian teen series Degrassi Junior High and Degrassi High's farewell TV movie, School's Out. There were many requests by excited fans for the songs on radio stations throughout Toronto. In 1993, Harem Scarem released their second album, Mood Swings. The album had more of a harder sound to it than their previous album. Even though fans consider Mood Swings to be their best album, it was a commercial disappointment and it charted at #83 on Canadian charts. The album's lead off single was "No Justice", it managed to chart at #59 in Canada, but the other two singles failed to chart. In 1995, the band released their third album Voice of Reason. The album introduced a change in the bands musical style, and was very different from the other two albums. the song "Blue" was released as a promotional single, and had a music video for it. However, fans didn't give the album a chance and it failed to chart. The next two albums; Karma Cleansing (which was released as Believe in Japan) and Big Bang Theory, saw Harem Scarem change their sound to go more modern. However, both the albums (and the singles from them) failed to chart, assuring that Harem Scarem will never find success in the United States. In 1998, the band released their last single; "So Blind", which didn't chart. In 1999, Harem Scarem changed their name to Rubber, and started releasing albums under that name in Canada. However, they still used the name Harem Scarem in Japan and the rest of the world. Rubber made a music video called "Sunshine", which had two guys that looked like Jay and Silent Bob and parodied movies which were released around that time, such as American Pie. The band released two albums as Rubber in Canada, but later dropped the Rubber name and switched back to using to their original name, Harem Scarem. In 2003, Harem Scarem released their comback album, Higher. The album's sound was more of a combination of classic melodic rock with a modern twist to it. The album also featured the power ballad, "Higher". In 2005, Harem Scarem released Overload, followed by Human Nature in 2007. The Japanese version of Overload features a cover of the AC/DC classic, "You Shook Me All Night Long". On July 19, 2007, lead singer Harry Hess announced that Harem Scarem "will make one more studio record and then after 20 years we have decided to move on to other things".[1][2] The final album is called Hope and was released July 2008.